What exactly is it and what is the use of replacing it?

What is the downpipe

The downpipe is simply a 40-60 cm long pipe that starts immediately after the turbine to connect to the exhaust system.

It is usually used only on cars with turbo engines. Because the turbine is interposed between the manifolds on the head and the exhaust and to connect to the exhaust system you need a pipe that lowers the exhaust line.

Said so it makes little sense, but on aspirated cars the manifolds that start from the head are connected to the exhaust pipe towards the bottom of the car.

On cars with turbocharger, a section of pipe (the downpipe) is needed to connect the turbine to the rest of the exhaust system which is lower than the engine, which is why it is called down (low) pipe.

Within this section of pipe, there is usually a catalyst or a particulate "filter" (in the case of diesel engines). Basically there is a component with a filtering function that serves to reduce exhaust emissions.

In the photo below you can see a standard downpipe fitted to a car, which has been sectioned to show the interior. 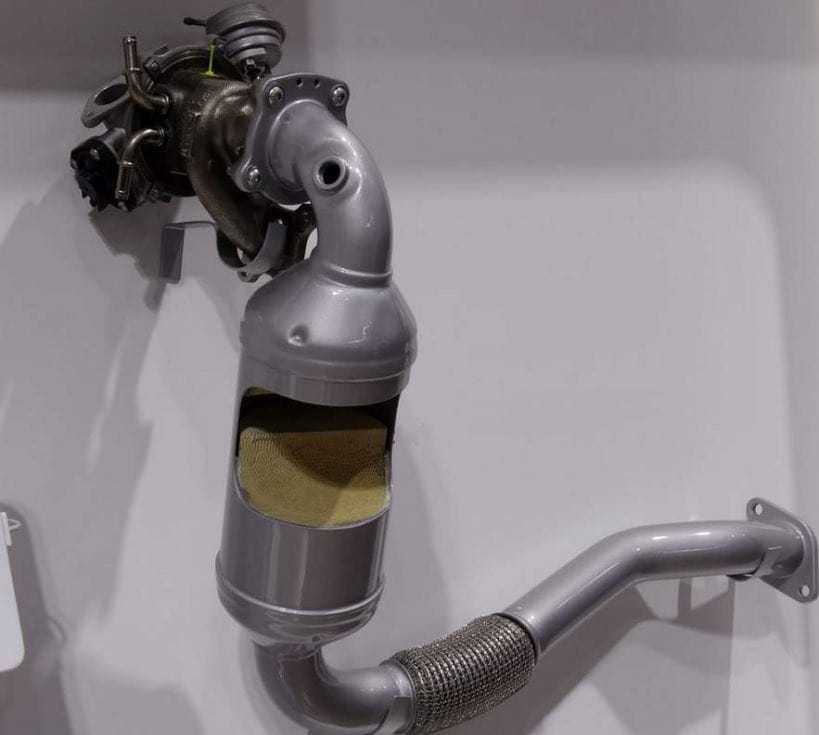 Does my car have a downpipe?

If your car is turbo (diesel or petrol) definitely fit the stock downpipe (remember, this is a connecting pipe).

If your car is aspirated, do not mount the downpipe as it is useless.

The latest generation cars are almost always turbocharged, therefore they already have the original downpipe as standard.

With the InoxPower downpipe you can get a noticeable increase in power, higher than that of the simple ECU remapping, as well as improving the sound, the only real block that doesn't make your engine roar.

Because the downpipe is replaced

Normally the downpipe with filter is a component subject to wear, in particular this happens clearly on diesel engines, where the DPF tends to get clogged and often, with the passage of time, struggles to regenerate.

Within this guide we will not go into detail on why this happens.

Here we focus on the reason why you usually change the stock downpipe with a racing one, that is, for the increase in power.

If you carry out some elaborations to increase the power of a vehicle with a turbine (I remind you that these are changes that should be carried out only to run in a closed circuit) the first step is the classic "map" to the control unit.

In itself it would already be a sufficient modification to have a first increase in power.

However, if you want to get the maximum performance from your engine, without going to intervene on turbo, pistons, connecting rods or power supply, and WITHOUT COMPROMISE RELIABILITY, then there is a next step, what is often called "stage2".

Stage 2 essentially consists of the installation of the racing dowpipe, intake and specific map (the term stage 2 is generic, sometimes includes other modifications).

The key is to replace the dowpipe with one  INOXPOWER RACING.

A simple step that however radically changes the result, allowing a significant increase in power.

Installing DOWNPIPE RACING there are 3 essential and perceptible advantages.

The first is that, together with a special map, you get more power and more torque, and so far we are (I remind you that you get even more than the simple basic map, without going to further stress the components, as it's a natural upgrade).

The reason is simple, the racing downpipe has no "plug" or filter and allows the gas to escape without brakes.

The exhaust gases are free to pass undisturbed without limitations, and is one of the fundamental principles for increasing the power of internal combustion engines.

The second advantage is often unknown because not everyone is aware of it, but a racing downpipe helps protect and extend the life of the turbine.

As there is no longer any filter to block the exhaust gas, the heat is quickly removed together with the gases.

Inside the standard downpipe the temperatures are often prohibitive (especially when you have to regenerate to clean yourself and get rid of filtered obstructions, burning them).

With a racign downpipe the temperatures drop drastically and this is a great advantage for the mechanical parts and the turbine.

The last advantage concerns the sound.

Without making any changes to the exhaust (with the exception of the downpipe) the sound changes, it becomes more sporty, perceptible and dark.

The engine finally sings and you can start enjoying its previously muffled rumble.

Finally, there is also a weight advantage, but on an average car it is practically imperceptible and negligible.

Do you want to achieve all this?

Now that you know what the downpipe is and what it is for, you have a clearer idea if it is a product for you.

For our part, we only make downpipes for sports cars, mainly BMWs, which in addition to being sporty also have some horses to have fun.

Ours is not a random choice. Making a downpipe that makes it (we talk about it in our dedicated article) is not simple and trivial.

It is not enough to weld two pipes.

This is why we have selected some of the most popular engines with a certain power (let's say over 200 hp as standard) or in any case with potential that the downpipe helps to bring out.

We decided to create the best downpipe for that type of engine through tests and studies, being 100% certain of the final result in terms of assembly, power and sound.

Are you curious to see if we make the downpipe for your car?

CLICKING HERE YOU CAN SEE THE LIST OF OUR APPLICATIONS